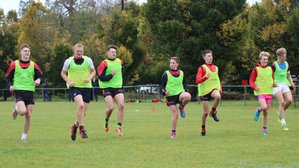 Heath has organised its own touch tournament for the Heath Academy – made up of players U16 through to U18 – allowing the strong youth squad to test themselves against each other. Last Sunday saw the second of three rounds of the Heath Academy Ready4Rugby Touch league featuring the combined squads of both the Colts and Under 16s.

Over 75 players took part in the round robin competition in which 8 teams of mixed age groups played against each other at Whitemans Green.

High skill and fitness levels were on display with some of the 15 minute games being very close encounters.

There is still all to play for as each of the teams try and get themselves into the play off positions for finals day later this month.