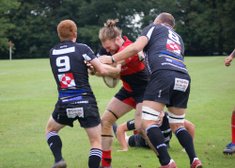 After a dominant display at Dover the previous week, Heath were looking to secure their fourth straight league win of the season when facing the challenge of Deal & Betteshanger at Whitemans Green. The pitch had taken the week’s rain well and conditions were near-perfect as the Heath side, showing a number of changes from the trip to Dover, took to the field on a grey October afternoon.

Clearly in confident mood, Heath immediately had the visitors under pressure with their suffocating defensive sets meaning all the play was in the Deal half. Just short of the ten minute mark a number of phases from the rampaging Heath pack sucked in the Deal defence before the ball was moved through the hands, then wide down the left, for full back Will Reeves-Perrin to dive over for the opening score in the corner. 5-0 to Heath.

Only five minutes elapsed before Heath extended their lead. A break from flanker Steve Doku from his own half took play deep into Deal territory where the forwards took more phases up to the line. Again the ball was moved left where this time fly half Jack Lucas had the space to ghost in untouched for a try which he converted himself for 12-0.

The half continued in the same vein with Deal failing to get any continuity as the Heath defence did its job, with regular turnovers meaning the visitors were always under pressure. On the half hour a Deal scrum on their own 5 metre line was disrupted and then turned over by Heath. By way of some text book pick and go phases, the ball was moved to the blind side and to second row Patrick McPherson, who shipped it onto Doku who was widest of all to score on the right for 17-0.

There was no further score in the half and although turning around to play up the hill, Heath were clearly in the mood to get the job done. Deal were quickly pinned back in their own half and when the visitor’s clearance kick went straight into touch from just outside the 22, Heath had a platform to work from. Decent lineout ball saw the Heath backrow move the ball into the midfield, from where it was quickly recycled wide right for centre Matt Smith to dummy and cut through the Deal defence for 22-0.

Whether it was the bonus point being achieved or a yellow card being awarded against them, for some reason Heath switched off and gave the visitors the opening they had been waiting for – a quick tap penalty led to the visitors’ first try of the day from one of Deal’s first forays into the Heath 22 . Deal converted their try for 22-7.

The loss of concentration was temporary, however, and a Deal player in the bin allowed Heath to put the game to bed. A Josh Salisbury break took play upfield and after further quick phases which decimated the Deal defence, scrum half Charlie Best zipped through for a try converted by Lucas for 29-7.

From the restart Deal knocked on but from the resulting advantage Reeves-Perrin broke from the back to put winger Jamie Diggle in space to score in the left corner. Lucas was accurate off the tee for 36-7.

Heath were playing all the rugby and a counter-attack from deep saw them up to the Deal line where the Heath skipper, Sam Drage, tried to barge his way through only to be stopped inches short. An illegal Deal boot kicking the ball away from the ensuing ruck was spotted by the referee who awarded a penalty try for 43-7.

Another loss of concentration from Heath, coupled with another yellow card, meant that Deal were allowed back on the board. Two tries in quick succession scored wide on the right saw Deal contemplating coming away with a bonus point as they pulled the score back to 43-17.
The home side, once back to their full complement, had other ideas and another break from deep led by Dougie Kern, was shipped through the hands to Reeves-Perrin and on to Best who finished with a try under the posts. Lucas put the half century icing on the cake with the extras for a final score of 50-17.

This was a thoroughly impressive performance from Heath against a Deal side who never lost their shape and fought right to the end. The set pieces worked well for Heath and the defensive shift from the strong and effective pack meant that the opposition never really had any time on the ball to play their own game. A couple of yellow cards and three tries against will irk the coaches and leave plenty to work on at training. Although very early in the season the bonus point win has seen Heath move two points clear at the top of London South East 2 as the teams reach the first rest week of the season.

Heath RAMS were away at Barns Green for their Sussex 1 league fixture. A really tight encounter which could have gone either way saw the RAMS lose narrowly by 14-12 in a good competitive encounter.