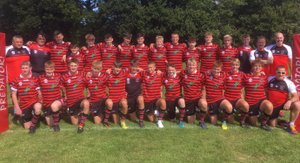 In a tough game against a resolute Lewes side, Heath Hawks finished on top to make it two wins from two league matches this season.

There was some initial uncertainty about whether this game would be played owing to the recent torrential rain. However, the weekend was dry and sunny and so the league game at Lewes went ahead in what, ultimately, were ideal conditions.
The first half was generally a fairly even encounter with both sides working hard to find an opening. Heath probably had the majority of the possession and territory but couldn’t find an opening, principally due to the tenacious Lewes defence, with the Lewes 13 prolific at stealing ball at ruck and maul time. Heath were also consistently finding themselves on the wrong side of the referee’s whistle at the breakdown.
With the half coming to an end and the likelihood of no score at half time, Matt Cains found himself in a bit of space on the right wing around the half way line. He was able to step a few defenders and then picked an inward curving line that took him under the posts for an excellent solo score. Will Goodwin converted to leave the halftime score at 0-7, which was probably a fair reflection of Heath’s territorial advantage.
The second half started with Heath looking to gain some further breathing space. This duly came on 43 minutes when Will Goodwin was able to step past a couple of defenders from about the Lewes 22 and then scoot in under the posts. He converted his own try to provide Heath with a more comfortable 0-14 lead.
However, Lewes were starting to show an increased attacking threat which was starting to push Heath back into their own half. A poor Heath clearance from their 22 went straight to the Lewes full back who ran it back into the heart of the Heath 22 and after repelling a few waves of Lewes attackers close to the posts, Lewes were able to work the ball wide out on the left to overlap the Heath defenders for the score. The conversion was missed, but Lewes were back in the game at 5-14 with growing momentum.
The Lewes pressure continued with Heath again pinned back in their half and on about 60 minutes, the Lewes 10 was able to run an outside arc around the tiring and stretched Heath back line to score close to the posts. The conversion was good and the game was now on a knife edge at 12-14 with under 10 minutes left.
However, Heath have learnt a lot over the last few years and were able to work themselves into the Lewes 22 for most of this period as they looked to close out the game. During which there was some dynamic driving play close to the line from James Watson and Ben Dronfield, which committed a number of Lewes defenders. The ball was then recycled to the left side of the pitch and some good handling from the Heath backs allowed some space for Tom Roberts to scamper over for the all important score, that was an excellent team try. The conversion was missed, but not long after the whistle went, with Heath victorious at 12-19.
This was an excellent game of rugby from two fairly evenly matched teams, played in good spirit. The coaches were unable to decide on a single man of the match award today and so it’s been jointly awarded to Bobby Collins and Ben Dronfield. The former for his dynamic carrying and defensive tackling and the latter for his sublime lines and timing of runs.
If Heath can maintain this level of focus and intensity throughout the coming league campaign, then another promising season beckons for the Hawks.
Share via
FacebookTwitter
https://www.hhrfc.co.uk/teams/
Recent news

Player of the match

Player of the match