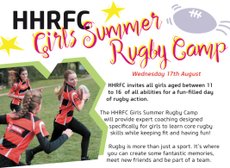 HHRFC Girls Summer Rugby Camp will take place on Wednesday 17 August at Whitemans Green from 10am to 3pm for all girls age 10+ (no experience necessary).

The HHRFC coaching team will be joined by two very special guest coaches – Danni and Erin Payten who both play for England Touch – who will be at the camp to show all the girls how much fun rugby can be and what you can achieve through rugby in terms of personal fulfilment and friendship. Danni and Erin both starting playing for Canterbury Touch in 2015 and have now joined London Galaxy. They also both play in the England Woman’s Open England squad.

Erin has played for England at U18s level twice both in Ireland and Scotland and Danni has represented England at Woman’s Open at the 2018 European Championship and the 2019 Touch World Cup in Malaysia. Danni has recently been named in the England squad, with Erin named as a reserve, for the 2022 European Touch Championships in Nottingham in early August, just prior to the summer camp at HHRFC.

Danni Payten commenting on her experience playing Girls Touch and her enthusiasm for the game said “We love touch so much! It’s like our family, we have met so many incredible people throughout our years of playing touch and have had so many opportunities to represent England at a high level. Touch is a sport which we can play with family and friends and play mixed or single gender and it’s so inclusive for everyone.”

Cost for the full day Girls Summer Camp is just £15 including a free T shirt.

There is also a girls only touch session every Saturday morning over the summer at 9.30am to 10.30am