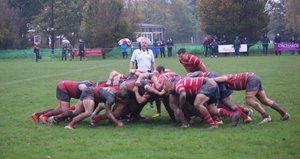 Even the filthy weather at Whitemans Green could not stop Heath getting back to winning ways with a gritty victory over heavyweight rivals Charlton Park in London SE2 on Saturday afternoon. The game had been in the balance during the week with relentless rain casting a major doubt over the fixture going ahead with pitches at one time looking unplayable but a break in the weather and strong wind overnight on Friday meant the game was given the green light. Conditions underfoot were likely to favour the visitors’ big pack and Heath were under no illusion that they were in for a tough afternoon if they were to take the points.

An hour before kick off the heavens opened which, compounded by 40 mph gusts made for a truly unpleasant environment in which to play rugby. From the kick-off the teams went toe-to-toe on an afternoon when it seemed preferable to play without the ball and pressurise the opposition into mistakes. The game settled into the anticipated contest with the big Charlton Park forwards benefitting from the fierce wind keeping the game tight and trying to use their size and strength to impose themselves. Heath’s familiar defensive set up was to the fore with the entire team tackling ferociously to halt the Charlton Park juggernaut. When Heath did have the ball, notwithstanding the conditions, they tried to play some rugby and moved the ball away from the contact area to attack the fringes and midfield.

Just short of the 20 minute mark a moment of quality from Heath saw the ball driven upfield by the forwards, recycled quickly and moved through the hands for Will Reeves-Perrin, alternating between flyhalf and full back, to cut in and score. Jack Lucas converted for 7-0.
The visitors redoubled their efforts and their forwards continued to rumble whilst their number 10 used the wind to kick deep into Heath territory. An infringement at the scrum in their own 22 saw Heath lose a man to the bin and Charlton Park capitalised by driving over from another scrum for 7-7.

The Heath pack were creaking in the tight but dominant at the breakdown and further pressure in the opposition half saw them awarded a penalty just before the break. Kicking into the teeth of the gale Lucas stepped up and coolly knocked it over to retake the lead at 10-7.
The benefits of a change of shirts for Heath at halftime didn’t last long and, even though they had the wind in their favour, it was Charlton Park that went on the offensive. In what was a pivotal part of the game the visitors launched wave after wave of attacks on the Heath line through their pack. Scrums and lineouts five metres out from their own line were heroically defended by Heath in a 10 minute spell of intense pressure. Charlton Park continued to turn the screw but a mighty effort from Heath, which saw them refuse to take a backward step, kept their opponents out. A string of dominant tackles from the Heath defenders forced Park back and the home team discipline not to concede a penalty when on their own try line was highly impressive, meaning that the forced turnover which allowed the home side to clear their 22 was celebrated as loudly as if a try had been scored.

Coming away pointless from such a long time in the Heath red zone seemed to affect Park and Heath emerged still trying to play all the rugby - perhaps too much rugby given the weather. A more pragmatic approach may have seen more ball retention but reward for the Heath endeavour came with ten minutes to play when the ball was moved left for Dougie Kern to skip through and score to leave Park needing two scores at 15-7.

Heath managed to negotiate the last few minutes to close out the win and secure a crucial four points which sees them stay top of the division. Any win against Charlton Park is a good result but to tough out a success in game conditions suited for the visitor’s style of play was a really top quality performance of which the whole squad and coaching team will be highly satisfied.

Heath Rams were away against old foes Lewes whose pitches had also passed late inspections. A tough game saw the Rams compete hard for the full eighty but eventually go down 31-0 in a closely fought contest before regrouping with the rest of the Heath senior squad back at the clubhouse for the annual Halloween celebration.

There is no rugby action next weekend other than the small matter of the Rugby World Cup Final between England and South Africa which will be shown live at the Heath clubhouse.