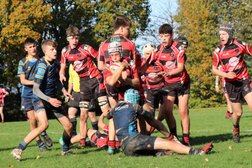 Heath Under 15s continue to shine

Operating two rugby sides within an age group can be tricky but Heath Under 15s have not only managed to successfully achieve this in the early part of this season, but have created such inter-squad competition that both sides are unbeaten both in and out of Sussex.
With early season wins against Berkshire champions Maidenhead, in the league over Heathfield and a comprehensive away win at Dorking, on Sunday Heath’s U15A squad faced old foes Guildford, the Surrey County Champions in a keenly anticipated game. Guildford were the last side to beat Heath some two seasons ago and the entire Heath squad had been eager for another opportunity to set the record straight.

On a wet pitch at Whitemans Green Heath tore into Guildford with a ferocity the visitors were not expecting and within two minutes, thanks to clinical and aggressive rucking, they took the lead with a well worked try for Galbraith -Gibbons.

The match turned into an arm wrestle with Guildford showing why they had been unbeaten for two years with an impressive line-speed and well drilled defence pushing the Heath waves of attacks back. However a quick tap penalty from Heath saw Batham-Read put into space to score a second try on the 20 minute mark for 12-0. More impressive phases of play from the home side saw the ball worked to the right and recycled quickly before going through the hands for winger Abraham to score for 17-0 before half-time.

Showing the strength and depth of their U15 squad, bringing five substitutes off the bench at half time led to no let up from Heath and from the restart they scored again after a scrum on half way allowed a break up the right deep into Guildford territory where the forwards won the ball and sent it left for Abrahams to score his second which he also converted for 24-0.

Guildford kicked long from the restart meaning Heath had to set up a ruck on their own 5 metre line. Quick hands from backs and forwards saw Heath turn defence into attack and glorious inter-passing saw skipper Vander finish off an end to end try under the posts for 31-0. A moment of indecision from Heath when fielding a kick in their own 22 showed how dangerous Guildford could be when the visitors crashed over for 31-5, but the momentum quickly returned to Heath when Vander scored his second in the corner after more great handling. Abraham converted for 38-5.

The Heath scrum continued to function well and when they took one against the head it created a platform for centre Mann to wrongfoot the defence and run in from halfway for a splashdown try converted by Batham-Read for 45 -5. Heath missed a couple of chance to extend the lead still further but were pleased with their day’s work at the final whistle, following an immense display from the whole squad, but particularly their forwards.

Meanwhile the Heath Development squad were away to Old Reigatians As where they faced a massive task against the home side’s huge forward pack. After wins against Maidenhead B, Eastbourne in the league, Bognor and Reigate the contest held no fears to this side who are more than capable of competing with and beating most A sides. A dominant first half display saw Heath storm into a 5-31 lead with scores from Smuraglia, Deere, Griffin and two for Walker. Old Reigatians fought back hard in the second half but a third try for Walker saw Heath take a deserved win 22- 38.

With what are effectively two A squads the Heath U15 squad remain very fluid with performances one week being recognised as the players rotate between the teams, providing healthy competition for places and producing some high quality rugby meaning the current points for this squad stands at 460 and against only 69. It also made for lively discussion regarding the winners of October’s California Raisins Player of the Month awards amongst the U15 coaching team!

Heath Juniors welcomes players of all ages and abilities at any time - to find out more email rugby@hhrfc.co.uk