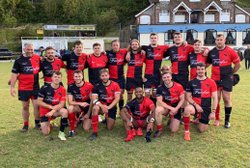 A trip to Dover is recognised by all teams in LSE2 as a tough assignment, but perhaps with memories of an away victory last season, combined with their strong start to the campaign, Heath set off on their coach trip with confidence and a steely resolve to bring back the points.

On a sunny but blustery afternoon Heath took to the park with a couple of changes in personnel, looking to impose themselves on a Dover side who had had a mixed start to the season. With the teams sizing each other up in the early stages, it was Heath who were looking the sharper and it was the away side who drew first blood shortly after the 10 minute mark. Heath possession just inside the opposition half saw the ball moved wide left, where scrum half Charlie Best beat the first tackler and then scooted away from the remaining defenders down the touch line before getting close to the posts for the score. Henry Warwick added the conversion for an early 0-7 lead.

Dover came back into the game and had a sustained passage of play in the Heath 22 which the red and black defence successfully withheld. A Heath turnover 10 metres out from their own line saw a blind side breakaway from back row Josh Salisbury which took play up to the halfway line. The ball was quickly recycled by the Heath pack allowing Jack Lucas at first receiver to carve out a route through the Dover backline and go in under the posts. Warwick slotted the conversion kick for 0-14.

From the restart, Dover again worked their way deep into Heath territory, but from a position only 5 metres out conceded a penalty and their scrum half was sent to the bin for foul play at the ruck. Heath cleared their lines and were on the scoreboard a short while later when after a number of phases which saw the ball moved back and forth across the pitch, a pass out wide to Patrick McPherson lurking on the wing allowed him to beat the cover from the 22 and score in the corner for 0-19.

At the break Heath were in control and looking to clinch the bonus point try. However this season Dover were not lying down without a fight and came back into the game strongly after some missed Heath tackles and a yellow card which led to two unconverted tries being scored in reasonably quick succession to pull the score back to 10-19, providing a significant shift in momentum.

Fortunately Heath were stung into action and started to dominate proceedings. A Dover infringement in midfield saw a quick tap penalty and kick into the Dover 22 for centre Owen McLaughlin to chase through and win the race for the touchdown, secure a lead of 10-24 and, importantly, the try bonus point.

Dover appeared to have blown themselves out and lost their cutting edge. Another period of pressure in the Dover half saw inroads made up to 5 metres out where, from a ruck, Jamie Diggle, playing at outside centre, crashed through the Dover defensive line for a try which was converted by Lucas for a 10-31 scoreline.

Heath saw the game out to the final whistle and will be pleased with another five points picked up on the road and a third consecutive win of the league season - although annoyed to let in two tries when firmly in charge of a match. Next weekend sees Heath host Deal & Betteshanger at Whitemans Green, looking to continue their form which, although early in the season, sees them sitting in second place in the LSE2 league, behind leaders Beccahamians.

Heath RAMS faced a really tough league fixture in Sussex 1 against league leaders East Grinstead 1s. A tight first half which saw the RAMS go a try down but then take the lead saw them trailing 12-24 at the break. A Heath yellow card saw East Grinstead take charge and a flurry of tries in the final quarter saw the visitors run out 12-52 winners. Next week the RAMS face Barns Green away.