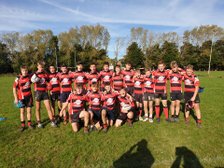 Finally a break in the rain provided some welcome warm Autumn sunshine for Heath A’s visit to Worthing in their latest Waterfall match.

With the October half term having its usual impact on availability, Heath were short of a couple of regulars and Worthing had mustered a squad of 15 but without any replacements.

Replicating England’s performance on Saturday, Heath took the game to Worthing and scored within the opening minutes. The forwards combined to devastating effect creating confusion in the defence and releasing Charles-Manley who, at pace, was simply not going to be stopped until he grounded the ball under the posts and gave Hartley a straight forward conversion.

Charles-Manley secured his brace of tries not long after the re start with a fine supported run down the right wing presenting Heath with a 0-12 lead.

Worthing in some shock started to rack up penalty decisions against them and in doing so presented a dominant Heath pack with the spring board to punch holes in the Worthing defence and release the backs, enabling Pearson and Phillips to touch down in turn. Hartley converting the latter of these two tries, giving Heath a 0-24 lead at half time.

Heath started the second half as they had finished the first with Kane and Hammocks not only making ground every time they had the ball in hand but putting in tackles from which Worthing had no reply other than to increase their penalty count for repeatedly failing to release the ball.

This mounting pressure soon delivered a classic centre’s try for Dolan who had spotted and taken advantage of an overlap created by the fast and accurate passing of the Heath backs. Hartley converted to bring the score to 0-31 in Heath’s favour.

The restart, dropping once again to the safe hands of Kane, started the Heath attack on their relentless drive into opposition territory. With the pack hungry for action, Davis and Hammocks led by example and drove the forwards on charge after charge into their opposite numbers who finally gave way to the pressure allowing Hammocks to crash across the line to bring the score to 0-36.

With Worthing having the strength sapped out of them by a combination of the strength of the Heath pack and the speed of the backs, Davis and Clare, both having returned to the field from injury, harried the Worthing pack mercilessly culminating in a wonderful forwards try with Clare crossing the line, covered in but undaunted by the Worthing players clinging to him and raising the score to 0-41.

Worthing, despite great tactical kicking in an attempt to break the Heath back line, found themselves on the back foot with Heath turning defence into attack within moments and setting Kane up for a a fully deserved try, rounding off a great game for the Haywards Heath California Raisins Player of the Match.

With the final whistle recording a 0-46 victory, Heath left the field recognising the excellent discipline the whole squad had presented and with the sense of a job well done.

Shirts and Ties as usual please!